Shopping can be hard for us. Wandering through aisle after aisle looking for things that are vegan-friendly and look good, dodging whole sections of the store until we stumble upon the pathetic excuse for a “vegan aisle.”

Still, we persist, avoiding refried beans that, for some reason, have lard in them. Trying not to fall for sweet, colorful snacks with gelatin in them. Then we finally get to the cereal aisle. A haven, right? Not exactly.

Unfortunately, many of the most popular cereals available are not friendly for vegan consumption, even if it seems like it shouldn’t contain animal bi-products. Now you’re asking yourself, “What cereals are vegan?” We found ourselves asking the same question not long ago, and that got us to do a little research, so you don’t have to!

There are cereal brands are not so honest in their display of veganism, so we decided to conduct further research based on their ingredients. If you’re nervous about being lied to, fear not; here is our list of cereals that are surprisingly non-vegan.

Let’s get this bombshell out of the way: Cheerios are not vegan. No, we’re not talking about Honey Nut Cheerios—it’s pretty evident from the start that those aren’t vegan. Nonetheless, you’re probably just as upset as we were, because we were positive we were in the clear with Cheerios.

They’re pretty much the simplest cereal you can buy, and it’s not awful for you, either. But Cheerios contain vitamin D3 which is derived from lanolin which comes from sheep . We learned that nearly any fortified cereal has a good chance of not being vegan. It was a real bummer, but we’re glad we know now. We hope you are, too.

Ahhh, Special K. Your grandparents’ favorite cereal right behind Raisin Bran. (Raisin Bran isn’t vegan either! It falls into the vitamin D3 Bandcamp.) We’re only joking, of course; we’re not here to make fun of people’s taste in cereals.

None of us have ever tried Special K, but if you eat it regularly, you might want to cut that habit short. Unfortunately, Special K contains calcium caseinate in its ingredients, which is derived from milk . We’re not sure why any cereal needs a milk derivative in it, but we aren’t about to argue with Kellogg, the King of Cereal.

This one isn’t as terrifying as it looks. Kashi makes all kinds of delicious vegan breakfast foods that you can chow down on to your heart’s delight. However, don’t assume that everything with the green Kashi logo on it is vegan—always check the ingredients. According to an employee, some of their products contain animal by-products .

Looking at the ingredients label is recommended, but you can also look on their website, where they offer an option only to view their vegan-friendly products! (Keep on the lookout for “vegan-friendly” labels on Kashi’s packaging in the future!)

Maybe this one isn’t as surprising as the other cereals on this list, but there’s a bit of controversy surrounding this one, so we thought we would include it. Cinnamon Toast Crunch’s maker, General Mills, denies any claims that the cereal contains milk in it—claims that were brought up by Berkeley  and foodfacts.com.

According to General Mills’ ingredients list, it still has that annoying vitamin D3 in it, so whether it has milk in it or not, it’s not vegan. Either way, it’s a disappointment for us. You’re never going to watch those goofy commercials the same way again.

Another victim is fallen to the deceptive vitamin D3 , Froot Loops were one of our favorite cereals as a kid. If we had known what we know now, we never would’ve even made eye-contact with that toucan mascot.

Regardless, the past is the past, and we can only move forward with the knowledge that Froot Loops are not made with vegans in mind. We’re going to be on the lookout for some vegan Froot Loops alternatives! Can we all agree that the real shocker here is that they don’t include any real fruit?

Ahh, Frosted Mini-Wheats. The closest thing the real world has to Calvin and Hobbes’ Chocolate Frosted Sugar Bombs. Okay, that’s probably an exaggeration, but that doesn’t exclude the cereal from this list.

Not only is this cereal not vegan, but it’s also not even vegetarian! Here we thought that the only time someone could have a non-vegetarian breakfast was if they had it with bacon or ham, but unfortunately for kids everywhere, Frosted Mini-Wheats contain gelatin, which is used for the frosting.

Gelatin is derived from collagen, a naturally-occurring protein in connective tissues, bones, and various other animal body parts. Now that we know that Frosted Mini-Wheats are made from animals, we’re regretting the Calvin and Hobbes joke earlier.

Malt O’ Meal is another company that has a variety of vegan and non-vegan cereals mixed into their selection. That means that if you’re a Malt O’ Meal fan, you’d better be prepared to spend some time in the grocery store looking at ingredients, right? Peta has put together a list of the Malt O’ Meal breakfast cereals that you can eat.

If they aren’t on that list, steer clear. If you want to double check on your favorite cereal, always check the ingredients! But make sure to look out for everything on this list, whether it be that sneaky vitamin D3, milk, or gelatin.

Not only are Rice Krispy Treats not vegan (hint: gelatin), neither are the crunchy cereals that it’s made of. If you haven’t already noticed the trend, Kellogg’s is a big fan of vitamin D3. Another childhood cereal/snack has been revealed to be non-vegan.

The thing we don’t understand is that, while vitamin D3 is non-vegan, Vitamin D2 is vegan. We aren’t sure why D3 is so popular, but the best we can do is avoid it. Kellogg’s use of vitamin D3 has garnered quite a bit of online attention, seeing as they’re one of the most popular cereal brands out there.

Okay, this is the last Kellogg’s cereal we’re putting on this list. Kellogg’s use of vitamin D3 comes through in this kid’s cereal once more, putting the final nail in the coffin of our childhood cereal-eating memories.

To save time from here on out, we’ll just let you in on a little secret: only three Kellogg’s cereals are vegan, and those are Special K Protein Plus, Special K Red Berries, and Mini-Wheats Unfrosted Bite Size. We had never even heard of those kinds before writing this article. So, for the most part, Kellogg’s is off the table (literally.)

We figured we would end this list on a high note. All but one variety of Cap’n Crunch are entirely vegan. Everyone’s favorite peanut-buttery cereal is safe for vegans.

Now that we’re thinking about it, if we could choose any of our favorite childhood cereals to be the vegan one, we would totally pick Cap’n Crunch. The only kind you need to be wary of is Cap’n Crunch Sprinkle Doughnut Crunch, which has confectioner’s glaze, which, in short, is made from insects.

So vegans rejoice! There is one cereal that always has and will always be there for you when you’re craving something a little sweeter than normal.

We hope that this list was helpful in narrowing down what you can and can’t eat right before you sprint out the door for work. It can be very irritating, discovering food that you thought was okay is a no-go. Vegan lifestyles are challenging in general, and even frustrating at times.

Nonetheless, it’s important to stay motivated, so always keep in mind whatever made you choose a vegan lifestyle. We all know that the struggle is worth it. Out of all of these cereals, which one was your favorite? 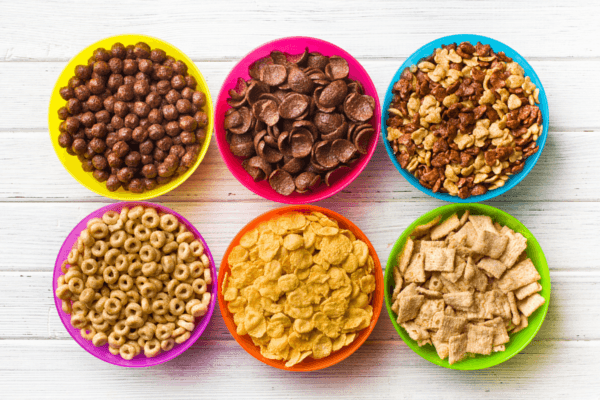 Do you have any stories of times you found out a favorite food wasn’t vegan? Remember, it’s a deceptive world out there. Companies try to hide their products under fishy-sounding names. Always do research, and when in doubt, just don’t eat it. Many cereal manufacturers are on the wheels of each food trend, vegan included.

While it may be a health choice for others, it’s a trend to keep an eye on for just as many. If you enjoyed this article, please share with your friends and family for awareness. As always, thank you so much for spending the time to read this list!